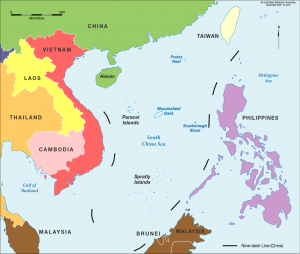 Source: CartoGIS Services, College of Asia and the Pacific, ANU

Is there a problem with…
Australia’s South China Sea policy?

Canberra’s current South China Sea policy needs an update. The recent near collision of two American and Chinese destroyers was an apt reminder of the ongoing tensions in the South China Sea. Any military conflict in these waters would jeopardise Australia’s vital economic and strategic interests.

At least US$3.4 trillion in goods transit the South China Sea annually, including two-thirds of Australia’s exports.1  Open and unfettered sea lines of communication are imperative for Australia’s wellbeing. Australia also has a clear strategic interest in the People’s Republic of China (PRC) not taking control of the South China Sea: Australia would be vulnerable to coercion if the PRC military dominated the waterway.

Three layers of disputes lie beneath the tensions in the South China Sea:

(1) competing claims of the PRC, Vietnam, Philippines, Malaysia and the Republic of China (Taiwan) to sovereignty over some or all of the islands and reefs there, and the accompanying maritime rights;

(2) energy and fisheries resource disputes between the same five governments, plus Brunei and Indonesia, and;

(3) disagreements between the PRC and the US and its allies over what international maritime law permits, particularly military activities and surveillance, within a state’s 200 nautical mile Exclusive Economic Zone. Only this issue directly involves Australia.

At present, Australian policy combines occasionally clumsy diplomatic messaging with calibrated, low-key exercises by the Australian Defence Force to assert navigational rights, as permitted under international law. This is a problem. As the risks of regional conflict rise, Australia needs to tighten its diplomatic language, reserve the right to conduct further exercises of navigation rights in international waters, and better coordinate its operations and crisis responses with Southeast Asia’s ‘middle powers’.

The official position on the South China Sea disputes over the past decade has been that Australia:

Points 1-3 align closely with collective statements made by the Association of Southeast Asian Nations (ASEAN) on the issue from 2014 to the present, which reflect a lowest common denominator regional consensus. But while points 4-5 broadly align with the ASEAN position, both contain language that makes Canberra’s position different from the modest regional consensus.

One is the call for a ‘halt’ to reclamation. The PRC completed its massive island-building project by 2016. ASEAN’s statements call attention to the consequences of the PRC’s dredging — namely that it has ‘eroded trust and confidence, increased tensions and may undermine peace, security and stability in the region’ — without explicitly demanding a halt to all such activities. Australia should do the same.

These semantics are important. The PRC expects to be criticised by the US and its allies, and routinely dismisses such criticisms as out-of-touch with regional opinion. Beijing takes unanimous, region-wide consensus criticisms much more seriously. Aligning Australia’s position as tightly as possible with ASEAN’s would underscore this regional consensus.

Australia should continuously coordinate its diplomatic comments on the South China Sea with key ASEAN countries and ensure region-wide consensus positions are regularly made clear to PRC decision makers, for example at high level meetings. Canberra can still make additional comments beyond ASEAN’s positions — along the lines of points 6-8 — though it should be under no illusions about how these are likely to be interpreted in Beijing.

The centrepiece of the Australian government’s activity in the South China Sea is a program of aerial patrols called Operation Gateway. Originally part of a Cold War effort to hunt Soviet submarines, the program now flies Australian reconnaissance planes out of Malaysia’s Butterworth air base to patrol above the South China Sea, including the Spratly area.

These aerial patrols are regularly interrogated by People’s Liberation Army units. Australian pilots have been recorded responding with assertions of ‘international freedom of navigation rights’ under the UNCLOS and the Convention on International Civil Aviation.

The practice is important to maintain Australia’s insistence on multilateral open access to international waters and assert the UNCLOS’s provisions for free navigation beyond the 12 nautical mile territorial sea limit of any land feature. It demonstrates that Australia does not recognise any attempt to enclose either the Spratly archipelago, or the entire area within the PRC’s nine-dash line, as territorial seas. The low level of fanfare accorded to the patrols by Canberra has helped ensure they have not become a major issue of contention between Australia and the PRC.

Australia also has other options to more forcefully assert navigational rights with equally clear backing under the UNCLOS. One option would be to send patrols within 12 nautical miles of a submerged feature, such as the PRC-controlled Mischief Reef, which is not entitled to a territorial sea. Another would be to conduct patrols using ships instead of, or in addition to, aircraft, as Labor defence spokesman Richard Marles has advocated.

For the time being, it may be more useful for Australia to reserve the right to conduct these additional types of lawful navigation—for example, if the PRC were to declare straight territorial sea baselines enclosing all or part of the Spratly Islands. The PRC has made clear that it would strongly prefer Australia not conduct such actions, and as such the possibility offers Australia a rare point of leverage with the PRC.2

If Australia does opt to further assert freedom of navigation, it should be conducted independently or with other regional countries. Joint patrols involving only the US and Australia would appear provocative and out of step with the region.

The gravest risk to Australia’s interests — and every other country in the region — is military conflict. The danger of US-China conflict is set to increase as Donald Trump’s trade tariffs and other policies reduce the economic interdependence that for decades has been an incentive to avoid conflict. The president’s mercurial temperament, combined with domestic political problems, could spur aggressive US behaviour. The administration’s inexperience also raises questions about its ability to defuse a crisis.

The use of military pressure by the PRC cannot be ruled out. The PRC used military force against Vietnam in the Paracels in 1974 and the Spratlys in 1988. Given Xi Jinping’s ambitions, the PRC may decide to forcefully evict one or more claimants from their outposts. Alternatively, unilateral PRC moves — such as reclamation on a currently unoccupied reef — may spur other claimants to seek or accept conflict. Domestic instability inside any of the claimant states could prompt adventurism. The increasing presence of military units from all sides, including the US Navy, could also give rise to an accident at sea that escalates out of control.

In these and other scenarios, Australia would be faced with significant pressures both for and against intervention. There are circumstances under which it may make sense for Australia to participate, such as to oppose a naked act of aggression. But the causes of an emerging conflict may be unclear, and it would be difficult to assess the eventual scope and duration of conflict at the outset.

While President Trump’s inexperience has added to the risks of military conflict, his administration’s ‘America First’ doctrine and transactional approach to foreign policy have also raised the risk of a US strategic withdrawal from the region. This forces Australia to consider East Asia, as Hugh White has put it, ‘without America’.

It is possible that a PRC-dominated South China Sea would be benign for non-claimant countries like Australia. But how Beijing would use such a position of power is unclear. Australia needs to carefully examine future scenarios in which the United States alone does not provide stability in the South China Sea and instead stability relies on relatively unconstrained PRC preferences — and the responses of other regional states.

Australia’s exercise of UNCLOS-mandated navigational freedoms may result in PRC economic retaliation. Beijing has significant means to punish certain sectors of the Australian economy, principally education, tourism and high-end consumer goods. If Canberra wants to position itself as a defender of the international maritime order, it must consider how it would respond to potential PRC economic counter measures.

In sum, Australia’s aerial patrols in the South China Sea to assert navigational rights are measured and backed by international law. However, there are unnecessary differences between Australia’s declarative policy and the regional consensus expressed in ASEAN’s official statements.

Dr Andrew Chubb is a Postdoctoral Fellow in the Columbia-Harvard China and the World Program, and a Fellow of the Perth USAsia Centre. His research examines the linkages between PRC domestic politics and security issues in East Asia, with a focus on strategic communication in maritime and territorial disputes.

This policy brief is published in the interests of advancing a mature discussion of Australia’s policy on the South
China Sea. Our goal is to influence government and relevant business, educational and non-governmental sectors
on this and other critical policy issues.

China Matters is grateful to the following reviewers who received the draft text anonymously for their
comments on the draft: James Goldrick, Baogang He, Greg Raymond, Bec Strating, Jingdong Yuan, Jian Zhang.
We welcome alternative views and recommendations, and will publish them on our website. Please send them to
[email protected]

The policy brief provides several recommendations, including that Australia should better coordinate with other Asian middle powers, especially Indonesia, to routinely ask the PRC to clarify its nine-dash line; as well as keeping open the option to exercise navigational rights inside unlawful archipelagic baselines and within 12 nautical miles of non-land features.

This policy brief is published in the interests of advancing a mature discussion of Australia’s policy on the South China Sea. Our goal is to influence government and relevant business, educational and non-governmental sectors on this and other critical policy issues.

China Matters is grateful to the following reviewers who received the draft text anonymously for their comments on the draft: James Goldrick, Baogang He, Greg Raymond, Bec Strating, Jingdong Yuan, Jian Zhang. We welcome alternative views and recommendations, and will publish them on our website. Please send them to [email protected] 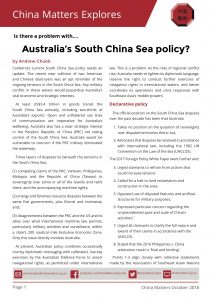