At the same time, student mobility from Australia to the PRC is almost completely absent from public discussion. The numbers are stark: there are 4,796 Australian students in the PRC, or just over one per cent of international students there. Furthermore, while the total number of Australians studying in the PRC has increased, the majority stay for less than six months.

In order to improve Australians’ grasp of Chinese language and understanding of the PRC’s influence in our region, students need to be spending more time in the PRC and enrol in Chinese- rather than English-taught programs. To facilitate this, both the tertiary education sector and the federal government should provide greater incentives for students to take part in these longer programs.

Research by the Australian Department of Education shows that the PRC is the second most popular destination for Australian university exchange and study abroad students. Additionally, while the numbers have fluctuated over recent years, there has generally been an upward trajectory (see figure 1). However, the number of students in longer programs has stagnated (see figure 2). According to the most recent data from the PRC’s Ministry of Foreign Affairs, of Australians studying in the PRC in 2016, 69 per cent stayed less than six months. 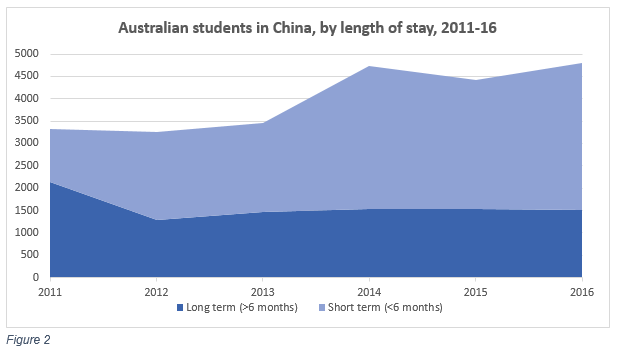 There are several problems with shorter-term stays. Most participants in short-term Chinese language immersion programs engage more on a day-to-day basis with their foreign classmates than with local Chinese students. Chinese universities usually offer separate accommodation for international students. Thus, while the classroom experience might be immersive, the social environment outside the classroom often dilutes linguistic and cultural engagement.

The abundance of English-taught programs exacerbates this. Peking and Tsinghua universities have introduced the prestigious Yenching and Schwarzman Scholars programs respectively, which have no Chinese proficiency requirement. Some programs explicitly forbid enrolment of PRC nationals, eradicating the possibility of interaction with Chinese students in the classroom, and in turn the possibility of an authentic experience.

Longer stays offer profound benefits. The more time spent overseas, the greater the degree of language immersion and fluency. This is sorely needed in Australia. 2016 Census data show that while Mandarin Chinese is the second most commonly spoken household language in Australia (2.5 per cent) an overwhelming majority of households (72.7 per cent) speak only English. This leaves a huge knowledge deficit, demonstrated by the employment demand for bilingual speakers. Earlier this year, Tim Mayfield, Executive Director of Asialink’s Asia Education Foundation argued, ‘A good strategy [to fill this gap] is to start incorporating native Mandarin speakers in top companies using those bilingual skills’. However, reliance on native speakers will  not reduce the knowledge deficit. As Jane Orton has pointed out, ‘[I]t may often be the native English speakers who are seeking information or connection that is vital to them. Relying only on what people can or choose to tell them in English … leaves English speakers in a passive position’.

With this in mind, universities can play a role by providing greater incentives and more opportunities for undergraduate students to undertake longer and Chinese-taught programs, especially for those majoring in Chinese Studies or related disciplines. Further incentives could include giving priority to scholarship applicants enrolling in longer programs, and integrating a compulsory year-long exchange into competitive undergraduate language-focused degrees. The Australian National University’s ‘Year in Asia’ program is an example of the latter. More credit points could be offered for Chinese-taught subjects. Other actions could include reviewing existing exchange agreements and negotiating extensions; and surveying students to ascertain the reasons behind their preference for short-term programs, in order to develop initiatives to address the key challenges.

On the government’s part, the New Colombo Plan could prioritise proposed programs over six months in length, which would in turn incentivise universities to develop creative and rewarding programs for more immersive China experiences.

Universities also have a role in empowering students to make informed choices about their studies, both during their tenure and beyond. This includes raising awareness of alternative sources of funding, such as the PRC’s China Scholarship Council (CSC). The CSC offers a comprehensive suite of scholarships for Chinese-taught degree programs, at the municipal, regional and national levels. Individual PRC universities also run their own scholarship programs.

Chinese-taught programs not only offer a more immersive language experience – by completing assignments, presentations and theses in Mandarin, one’s Chinese is guaranteed to improve exponentially – but also give the student invaluable insights into the PRC’s education system, politics, media and society. These are all valuable skills for Australia’s future. China scholars should consider the benefits of witnessing developments first hand; these insights are not attainable at arm’s length. While living in the safety net of one’s native language and among a familiar community might be tempting, it makes for superficial engagement.

Simone van Nieuwenhuizen is Project and Research Officer at the Australia-China Relations Institute at the University of Technology Sydney. She lived in China for three years, and holds a Master of International Relations (Diplomacy) from Peking University.

The opinions expressed in this article are the author’s and do not represent the views of China Matters.
(Photo: Junyu Wang via Flickr)