China Matters held its Fifth National Meeting in Brisbane on 24 March 2017 in partnership with the University of Queensland. Senior business executives and government officials discussed Australia-China ties in an unpredictable era. Each session ended with one or two policy recommendations for the Australian government. 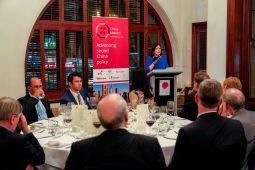 Session I: How should Australia shape its ties with China in an unpredictable era?

Session II: How should Australia prepare for a changed trade and investment landscape?

Session III: What should Australia do to meet the aspirations of Chinese international students?