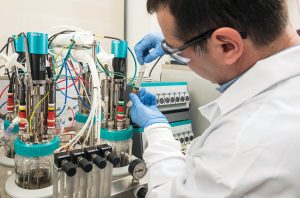 research collaboration with the PRC?

Australia benefits significantly from research collaboration with the People’s Republic of China (PRC). It provides Australian universities access to cutting edge technology, finance and know-how. Joint research projects have already had a positive impact on Australian lives. For example, Australian and PRC scientists developed the cervical cancer vaccine Gardasil, which has saved thousands of lives. It is in Australia’s interest that research like this continues.

However, collaboration with the PRC also poses risks. Technology developed as part of joint projects could be used either for military purposes or human rights abuses, like the arbitrary detention of over a million Muslims in Xinjiang. Neither are in Australia’s interests.

Australia needs to use a two-tiered approach to balance these risk and benefits. It should continue to use defence export controls (DEC) to block collaboration on core defence technologies. To deal with the more vexing problem of ‘dual-use’ technology that has both significant civilian and potential military applications, Australia should establish a Critical Centre for Research Collaboration that works with all sectors of government, universities and other stakeholders to identify and manage the risks arising from research collaboration. This would be part of a risk mitigation approach that encourages transparent due diligence from universities and individual researchers, instead of a broad expansion of DECs.

The three key challenges for this proposed Centre and Australia are to define and manage technology projects with dual-use potential, to deal with pressure from the United States to restrict PRC research collaboration, and finally to develop oversight mechanisms that are neither too burdensome nor too lax.

Australia’s Defence Control Trade Act (DCT Act) governs Australia’s export controls. Under the Act is the Defence and Strategic Goods List (DSGL). Any item on this list cannot be exported, supplied, brokered or published unless the Minister for Defence has granted permission or a legislative exemption applies, such as those which apply to military contractors listed in the Australia-US Defence Cooperation Treaty, like Thales Group Australia.

Decisions on what is added to the DSGL are becoming more complex as the speed of dual-use technology development increases. Technology lists such as the DSGL struggle to keep pace with change. Lists also hamper meaningful research if they are too restrictive.

A good example of the conundrum is Artificial Intelligence (AI). AI is a platform technology that will impact almost every field. Thus, most AI technology is not listed on the current DSGL. In 2017, the University of Technology Sydney (UTS) signed a deal worth approximately AUD 10 million with China Electronics Technology Corporation (CETC) to research AI and other fields.1 CETC is one of the PRC’s 12 state-owned Defence Industry groups and is thus a weapons manufacturer for the People’s Liberation Army. This group and its subsidiary Hikvision are building an AI-driven video-policing platform in western China to profile and suppress the Muslim population in Xinjiang, where over a million Uyghurs are detained without trial.2 One of the UTS projects with CETC is a “Complex Data Condition Based Public Security Online Video Retrieval System”. It should be noted a UTS internal review found that its collaboration with CETC could not have contributed to the existing surveillance in Xinjiang.3

On the other hand, the University of Sydney signed a memorandum of understanding with Fudan University to research brain disorders using data science, computational neuroscience and Artificial Intelligence. Listing components of AI on the DSGL could significantly restrict life-saving international research.

The other new complexity for DECs is the increasing technological capacity of non-transparent states like the PRC. Beijing runs a civil-military fusion (CMF) program to closely integrate its civilian and military sectors. The program is more opaque than civilian-military cooperation in countries like the US, which raises questions about the true purpose of PRC research collaboration. For example, Northwestern Polytechnical University’s (NPU) School of Computer Science has several research collaborations with UTS. The NPU’s School of Computer Science states on its Chinese-language website that its “academic work focuses on collaborative innovation and civilian-military fusion.”4 This is not mentioned on its English-language site. It is possible that UTS work is not used for that purpose but the risk that joint research efforts will be used in CMF without consent must be considered by researchers collaborating with the PRC.

PRC research collaboration poses other risks. Agreements sometimes include the funding of PRC research students to study and work in the partner lab in Australia. These can be hugely beneficial for both the lab and the student. But PRC students and academics who work in Australian labs are not always who they say they are.5

First, the US is strengthening its export control regime, which already hinders Australia-PRC research. For example, a project on renewable energies based at the South China Normal University, which is a collaborative partner of the ARC Centre of Excellence in Exciton Science at Melbourne University, had its purchase of a molecular- beam epitaxy (MBE) system from the US company Veeco blocked for export from the US.6 The researchers intended to use the machine for the production of semiconductor films used in solar hydrogen generation as part of a collaboration. But the machine was deemed a potential dual-use device for the fabrication of electronic chips that are essential for radar technology.7 Veeco had previously taken orders for MBE systems in the PRC.8

The US is likely to continue expanding controls. The US Commerce Department will publish new rules for ‘emerging technologies’ before the end of 2019.9 The Department’s 2018 advance notice listed a broad range of technologies that could be restricted, such as AI and biotechnology. A process to develop new rules for tightening export restrictions on ‘foundational’ technologies is also planned.

Second, the US has expanded the number of PRC organisations on its entity list. US companies that want to export products and software to entities on the list must apply for a licence. Source: US Department of Commerce, Bureau of Industry and Security, Entity List

In practice, entities on the list are often barred from doing any business with US organisations. American universities screen against the entity list and usually avoid doing business or accepting funds from organisations on the list. They may avoid collaborating with Australian university departments working with partners on the US entity list. If the list expands significantly, as it may well do, collaboration between Australian universities and the PRC could be affected. The percentage of direct overseas research funding in higher education research and development (HERD) is small – only three per cent in 2016.11 But, the attraction of collaborating with PRC and US researchers is strong. In 2018, about 15 per cent of all academic articles with an author from an Australian institution had a PRC co-author (16% for the US).12 This implies that much Australia-PRC collaboration is not due to direct funding from the PRC but rather because of the attraction of collaboration with international researchers, even on projects funded by the Australian government or university funds. Australia tries to manage the risk inherent in individual technology via the DSGL, but because of the speed of change and the increasingly dual-use nature of emerging technology, the DSGL is best suited to blocking the most defence-focused technologies.

Australia does not have a US-style entity list. Regardless, in a country like the PRC where the government can compel any entity to use technology for undesirable purposes, the effectiveness of entity lists is limited. For example, China South Locomotive & Rolling Stock (CSR) Corporation indirectly purchased 75 per cent of British company Dynex Semiconductors in 2008. At that stage CSR’s links to the military were not obvious. But by 2013, CSR had obtained military production licences. Technology from Dynex appears to have ended up in a PRC military aircraft launch system.13

Australia has the option of applying more rigorous visa checks to deal with the individual collaborator risk when the research partner wishes to spend significant time in Australia. This is more flexible than the expansion of the DSGL or creation of an entity list, which puts hard barriers around certain technological collaboration and companies. It allows the government to scrutinise individual researchers on a case-by-case basis.

Any safeguard system needs to take all three levels of risk into account but not be too stifling. In August, the government formed a working group for foreign research collaboration under the University Foreign Interference Taskforce. It is formulating guidelines to help researchers make a holistic judgement about research risk. The Taskforce’s next job should be to design a permanent Critical Centre for Research Collaboration. This centre should provide advice at the project level. In this age of widespread dual-use technology, judgements will be difficult. But it is in Australia’s interest to ensure that the individual researcher making the judgement is provided with the most effective tools possible.

This version of the brief has been slightly amended following a response from UTS.

Dirk van der Kley is Program Director – Policy Research at China Matters. His most recent work has been at the Australian National University, where his doctoral thesis focussed on PRC economic statecraft. Previously Dirk worked as a Research Associate at the Lowy Institute for International Policy.

This policy brief is published in the interests of advancing a mature discussion on research collaboration. Our goal is to influence government and relevant business, educational and non-governmental sectors on this and other critical policy issues.

China Matters is grateful to five anonymous reviewers who received a blinded draft text and provided comments. We welcome alternative views and recommendations, and will publish them on our website. Please send them to [email protected]

Australia, like many liberal democracies, is struggling to set boundaries for research collaboration with the People’s Republic of China (PRC), argues Dirk van der Kley in the latest edition of China Matters Explores.

He outlines that the problem is straightforward. Collaboration with the PRC brings access to world class knowledge, advanced technology and much needed sources of funding for research that will do much good. But researchers focused on emerging technology have real concerns their work will end up unwittingly aiding the PRC’s military build-up, or even worse used in nasty human rights abuses occurring in western China.

Van der Kley argues for the establishment of a Critical Centre for Research Collaboration which brings all the relevant arms of government, academia and industry together to tackle this issue in a permanent setting.

This policy brief is published in the interests of advancing a mature discussion on research collaboration. Our goal is to influence government and relevant business, educational and non-governmental sectors on this and other critical policy issues.
China Matters is grateful to five anonymous reviewers who received a blinded draft text and provided comments. We welcome alternative views and recommendations, and will publish them on our website. Please send them to [email protected] 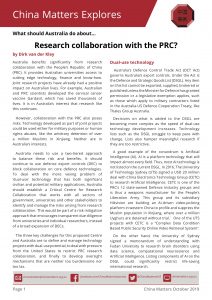