Source: Photo by M.Mono on Pexel

What should Australia do about…
a PRC economic hard landing?

As the economy of the People’s Republic of China (PRC) has grown it has matured from an overwhelming reliance on investment and exports to one in which a wealthier population has the capacity to consume more than previously.

With this maturation, the PRC’s economic growth is slowing to reflect a similar consumption-led economic profile to that seen in advanced economies. This shift is evident in the OECD’s long-term forecasts of GDP growth per capita. 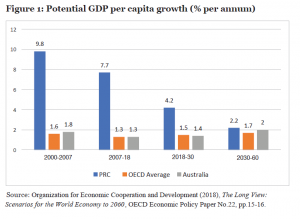 Many commentators are concerned that a shock will disrupt the PRC’s steady path of slowing economic growth to the degree that the PRC experiences a ‘hard landing’.

This matters to Australia because the PRC is the country’s largest trading partner, accounting for nearly a third of all exports. While Australia has benefitted from the growth of the PRC economy, it also leaves us relatively more vulnerable in the event of a downturn.1

Thus, Australia will not be able to avoid economic disruption in the event of a PRC hard landing, although the likely devaluation of the AUD will lessen the immediate shock. In the meantime, maximising overseas market opportunities for Australian businesses is an approach that provides some longer term insurance for the Australian economy.

The term hard landing lacks a precise definition. However, analysis of potential scenarios for a hard landing tend to assume a one-off immediate decline in GDP growth of three to five percentage points (from the current annual growth rate of about 6 per cent).

The cause of such a hard landing could come from a range of sources, including:

As the RBA notes, ‘While there is a broad range of potential triggers for a more severe slowdown in economic growth in China, in recent years authorities have proved capable of responding to individual episodes that posed systemic risk.’3

The likelihood of a hard landing is exacerbated if the triggers are released simultaneously.

The impact of a PRC economic downturn will depend on the severity and the duration of a hard landing. However, the policy response in Australia and the ability of our businesses to adjust will shape the nature and magnitude of the effect on Australia. The potential scope of outcomes is reflected in the range of results associated with a hard landing predicted by commentators, varying from:

To understand the nature and scale of the likely impacts, and what should be done, this brief investigates the impacts in the short term and over the medium term.

For companies with the bulk of their earnings from overseas buyers (e.g. education, tourism, etc.), a fall in the AUD would be a welcome event. Even domestically focused organisations with non-PRC investments will benefit from such a depreciation in the AUD.

As the tradeable goods sector makes up about 40 per cent of the Consumer Price Index basket, such a depreciation of the AUD would increase consumer prices (i.e. inflation) in Australia. This would ordinarily be seen as a bad outcome, but with inflation below the RBA target range of 2-3 per cent, increased inflationary pressure will be unlikely to have a major impact on the Australian economy.

Australian state and federal governments will lose revenue from a PRC hard landing. Most directly will be the loss of mining-related tax revenues. At risk are:

Reduced demand for natural resources in the PRC will cascade into lower commodity prices more generally and so undermine projections of the Commonwealth heading back into a Budget surplus (projected to be $7.1 billion in 2019-20).11

Any significant fall in commodity prices off the back of the PRC’s accelerated slowdown would likely result in mine closures or mothballings, with consequent job losses in pockets of regional Australia and lower royalties.

Hence, in addition to the revenue shock for Australian governments there would also be additional
budgetary costs from a PRC slowdown. These would take the form of:

Additionally, access to capital for both public and private organisations will become more challenging in this environment as we can expect to see:

Limiting the downside of a hard landing, but also limiting the benefits to Australia during the PRC’s rise, is that Australia has only a limited exposure to the PRC through investments into the PRC. The PRC hosts just 3 per cent of Australian investment abroad (compared to 29 per cent in the US) and so the direct downside is limited from an investment perspective.

In the medium term we can expect to see some of the negative first-round impacts of a hard landing ameliorated.

The depreciation of the AUD will increase the competitiveness of:

The risk for the Australian economy is that the PRC currency (CNY) will likely decline, which will partially offset the decline in the AUD/USD rate. Hence, while the depreciation of the AUD is an important shock absorber, it may be less responsive in the case of a PRC hard landing.

2. Impact of a global slowdown

As the largest global trader, the PRC’s economic health affects the global economy as a whole. Thus, we can expect that other countries will also take a hit from a PRC hard landing, leading to lower global economic growth generally. This will depress growth opportunities as companies look to diversify away from the PRC.

History (e.g. during the GFC) suggests that we could also expect the PRC to respond to any major downturn in growth with stimulatory measures designed to boost growth. Such measures have tended to involve major construction initiatives, with consequent increases in demand for Australian natural resources (iron ore and coal predominantly). This has the potential to be a major offset against an initial downturn in demand.

However, it is also possible the PRC Government’s concerns about its current account position result in more active measures to control outbound:

Both of these possible responses would be significant shocks to major Australian service export industries.

Additionally, we can reasonably expect to see:

Pre-emptively, the Australian Government should:

Hence, in the event of a hard landing the Australian Government should:

Jeremy Thorpe is PwC’s Chief Economist and is a Partner in PwC’s national Economics & Policy team. He provides macroeconomic and associated policy advice for both corporates and governments. He has provided advice to the Australian Government on the costs, benefits and utilisation of free trade agreements and modelled the economic impact of the PRC halting foreign students coming to Australia.

The latest edition, penned by PwC Chief Economist Jeremy Thorpe, considers the possible impact on Australia of a PRC economic hard landing and provides policy options for Canberra to prepare for the possibility.

Australia will not be able to avoid economic disruption in the event of a PRC economic hard landing, but its effect on Australia will depend on the Government’s policy response and the ability of our businesses to adjust to a downturn.

To pre-empt the possibility of a PRC economic hard landing, Thorpe recommends the Australian Government continue prosecuting broad free trade agreements to enhance flexibility for exporters; support Australian firms to enter and grow in a broader range of markets and ensure that bank provisions can accommodate a PRC hard landing.

In the event of a hard landing, the Government should resist the temptation to protect the AUD; and be diplomatically nimble if the PRC pulls back state-directed investment in countries of diplomatic interest to Australia.

China Matters is grateful to six anonymous reviewers who received a blinded draft text and provided comments. We welcome alternative views and recommendations, and will publish them on our website. Please send them to [email protected]au 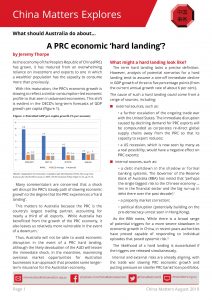