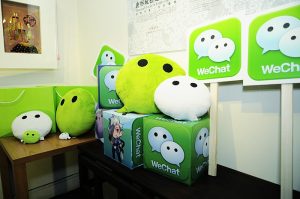 Is there a problem with…
WeChat?

Over the past decade, Chinese-language digital and social media have grown into a vibrant and complex sector, both in the People’s Republic of China (PRC) and globally. WeChat, the most popular of the social media platforms, is problematic in Australia because it relies on only partially encrypted messaging, leading to concerns about possible PRC government surveillance and censorship.

Digital and social media dwarf traditional Chinese language media such as radio, television and newspapers in terms of reach, revenue and impact. In January 2019, WeChat announced that it had surpassed one billion daily active users.

The rapid growth of WeChat in Australia, combined with the PRC’s history of censorship and interference in its domestic media and technology organisations, has led to speculation about possible security risks and political interference within Australia.

The main security concern about WeChat appears to be that the PRC government could use WeChat to conduct political, military or industrial espionage in Australia, or seek to undermine Australia’s democratic processes. These may be valid concerns. However, evaluating their validity is impossible; this is a critical challenge that lies outside the scope of this policy brief. But assessing the nature and level of these concerns, outlining the reasons behind the underlying misconceptions, and identifying constructive avenues for politicians and businesses are also important. Thus, while there are problems with WeChat in Australia, there are also problems with the framing and conceptualising of the issues involved.

What are the concerns?

As WeChat’s user base in Australia continues to expand, its social, economic and political impact grows stronger. In parallel with this growth, several Australian commentators and the media have voiced concerns about the platform. These include concerns:

• that the Communist Party of China (CPC) may be using WeChat to influence the outcome of the forthcoming federal election;1
• that international students from the PRC may use WeChat to promote pro-PRC nationalistic sentiments on behalf of the CPC;2
• that WeChat is part of the CPC’s expansion into Australia’s public discussions;
• that because of WeChat’s poor encryption and privacy standards, the PRC’s capacity to conduct surveillance of Chinese-Australians may pose a threat to national security; and
• that WeChat censors content so publishers in Australia (and the PRC) cannot post material that the CPC deems sensitive.

Some of the other concerns result from misconceptions about WeChat as a social media platform and its use in Australia. This policy brief outlines the key misconceptions, and offers recommendations for the government, political parties and public servants

What are the main misconceptions?

The first misconception is that WeChat is a monolithic communication system that is primarily used by the CPC for propaganda purposes. It is not. It is true that media content circulated on WeChat’s various platforms is subject to scrutiny and censorship by the PRC authorities. In recent years, self-formed WeChat groups have been limited to a maximum of 500 members, as part of a suite of new laws that were put in place to minimise the spread of information critical of the government. Recently, the creators of these groups have been warned by PRC authorities to take responsibility for any politically controversial or socially destabilising content posted in their groups.3

WeChat, like Facebook and Twitter, is a social media platform that carries wide-ranging and diversely-sourced content; its ideological landscape is fragmented and contested, despite the CPC’s heavy-handed attempts at control and censorship. There is a crucial distinction between WeChat being subject to the PRC authorities’ censorship and WeChat being an instrument of CPC propaganda. So, while some of the content carried on WeChat is bound to be propaganda, much of the content is produced by diverse sources that are subject to censorship but are not propagandists. We should not treat the WeChat platform as little more than a propaganda machine.

The third misconception is that all Australian WeChat users are automatically subject to censorship by WeChat or the CPC. WeChat does censor posts and private communications that are sent or received on accounts that were opened with a PRC phone number. This includes many Chinese who now live in Australia. There is evidence that WeChat accounts created with non-PRC phone numbers can share material considered sensitive by the CPC with other international accounts, but not with accounts linked to a PRC phone number.5 The latter have the option to create a separate account with an Australian phone number, although that may limit their access to some of WeChat’s e-commerce features. Further, there is nothing to prevent the PRC government from requiring WeChat to adopt more sweeping censorship practices in the future.

Finally, WeChat’s poor track record in relation to CPC surveillance within the PRC leads to concerns that WeChat poses cyber-security and espionage risks to Australia’s national security. Australia has banned Defence personnel from using the app on their work phones. The platform only encrypts data between the user and its own servers, not end-to-end, leaving all its traffic potentially open to government interception and control.6 This means that that the PRC government can possibly surveil private conversations on the app throughout the world. Thus, Australian users have good reason to be concerned about possible privacy issues. But many communication channels back to the PRC carry a similar risk of surveillance, so it is not a problem unique to WeChat.

So far, according to Meg Jing Zeng, there is ‘no firm evidence’ to suggest that WeChat has been used for PRC government espionage in Australia, nor is there tangible proof that the widespread use of WeChat will make Australians more vulnerable to hacking or any other form of cyber-attack.7 The PRC most likely has much more effective technologies for hacking and digital espionage than WeChat. Nevertheless, commentators have expressed a number of concerns – for example, that ‘China may use WeChat’s success here to further interfere in Australian internal affairs’.8 If evidence exists showing that these fears have materialised, it should be made public.

Despite this, concerns about possible cyber-security risks associated with WeChat persist. Three factors further compound this fraught issue: first, there is a strong ideological distrust of the CPC, and an acute awareness of its appetite for intelligence-related data – as is also the case with many other governments. Second, accurate assessments of the risks require technological expertise that is mostly opaque to non-specialist commentators and the public. Third, the secretive nature of national intelligence gathering practices makes it difficult for public commentators and the public to assess whether WeChat poses risks. Evidence of the connection between the PRC’s WeChat surveillance and Australia’s national security has not been made public.

Despite concerns over the use of WeChat in the 2017 Bennelong by-election to circulate a politically charged letter which criticised the Liberal government, there was little evidence of widespread electoral interference via WeChat. The Liberal Party won the by-election.

But there is plenty of evidence to suggest that WeChat can be – and has been – used by Australian political parties and politicians to try to win votes. The Coalition’s success in using WeChat to win marginal seats in the 2016 federal election is a case in point. After Chris Bowen became the first Labor politician to utilise WeChat to reach out to Chinese-Australian voters in a live, interactive chat, a number of politicians have subsequently set up WeChat subscription accounts. Recently, Prime Minister Scott Morrison opened a WeChat account in the hope of connecting with the Chinese-Australian communities, and Opposition leader Bill Shorten went live in a WeChat question-and-answer session with nearly 500 Chinese-Australian voters.

However, some politicians also rely on WeChat to deliver messages to Chinese-speaking communities that differ from their messaging to the wider public. For instance, while both Bill Shorten and Scott Morrison used WeChat to denounce National Senator Barry O’Sullivan’s ‘Chinaman’ remark in response to community sentiments expressed on the platform, the Chinese communities also noticed that Morrison’s statement was made only in Chinese, on WeChat, and not to the wider English-speaking public.

While the Australian business sector has been quick to exploit WeChat to reach the Chinese-speaking markets, self-proclaimed entrepreneurs have also readily adopted WeChat to engage in myriad business practices. These range from daigou (a relatively benign form of purchase-by-proxy trade) to more questionable ways of making money, which so far operate under the radar of regulatory bodies such as the Australian Competition and Consumer Commission.

Furthermore, the platform’s potential as a resource in people-to-people diaspora diplomacy has not been tapped. Politicians and Australian government departments could also use WeChat to promote Australian democratic values and ethics, and an ethos that better reflects our multicultural society.

Allowing misconceptions surrounding WeChat to persist perpetuates an inaccurate and potentially damaging public understanding of the complex nature of the PRC’s censorship, foreign influence and propaganda efforts, and the actual ways in which these efforts may manifest themselves in Australia. It also passes up enormous political and business opportunities. Politicians and Australian government departments could also use WeChat to promote Australian democratic values and ethics, and an ethos that better reflects our multicultural society.

In the latest edition, Prof Wanning Sun says the Chinese social media platform is problematic in Australia because it relies on only partially encrypted messaging. But she also debunks many of the myths and misunderstandings underlying one of the fastest growing social media apps in the world. Sun points out there is much speculation about WeChat’s susceptibility to security risks, PRC government surveillance, and political interference in Australia, before dividing the various suspicions into misconceptions and legitimate risks. Additionally, the author assesses the challenges and opportunities associated with WeChat and the political process in Australia.

The policy brief culminates in several policy recommendations. Sun urges Australian media to employ more Chinese-speaking journalists so they can interact with and report on WeChat. She also suggests the publication of government research, if there is any, into WeChat’s encryption safety; and the provision of education to public servants on WeChat best practices, to enhance its use for public diplomacy.