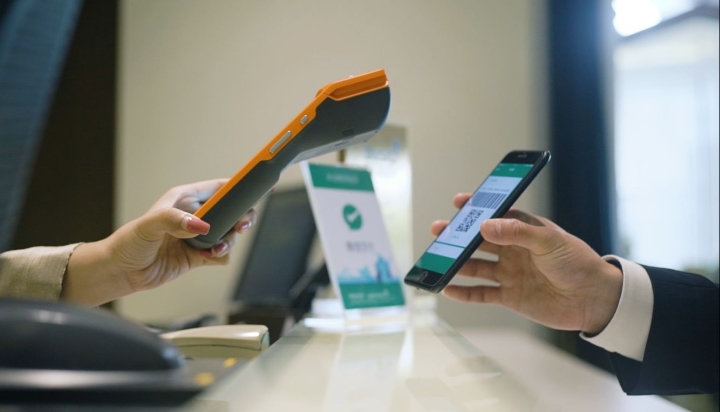 At the entrance to Alibaba’s headquarters in Hangzhou is a large, traditional-style Chinese painting. On closer inspection, hidden in the scene are many of the big names in tech: Steve Jobs, Mark Zuckerberg, and Bill Gates to name a few. The painting captures the essence of the Alibaba dream: to surpass the past achievements of the Western tech world, and forge the future.

Many visitors to the People’s Republic of China (PRC) are struck by its technological innovation, particularly the widespread use of mobile payments. Alipay and WeChat Pay have become seamlessly integrated into people’s lives: users can hail a cab, shop online, and even give money to beggars on the street via their smartphones. Grame Barty, ex-Austrade Executive Director for International Operations, described this as a “financial technology tsunami” facing the Australian Government, business and regulation leaders.

To ride this wave successfully, Australia must strike the right balance between promoting opportunities this new technology offers for attracting Chinese tourism and spending power, and addressing concerns around data security and the potential economic influence the PRC could leverage through these payment platforms.

Australia is a popular destination for Chinese tourists who make up the largest proportion of visitors by nationality, spending a total of A$10.3bn last year, making up over 25 per cent of the total tourist spend. Retailers are increasingly offering Alipay and WeChat Pay as a way to boost spending. These methods offer customers convenience: it removes the need to carry cash, and avoids currency conversion costs by allowing payments in Renminbi. Alibaba’s Australia and New Zealand headquarters opened in Melbourne last year to encourage Australian retailers to market to Chinese customers.

Interestingly, there has been little effort to open up these payment methods to Australian consumers. Late last month, WeChat’s developer Tencent moved to allow major international credit cards on WeChat Pay, yet this was only possible on versions of WeChat downloaded in Mainland China, Hong Kong, Taiwan and Macao.

Part of the hesitancy of Chinese tech companies to offer these services to customers who are not PRC citizens stems from the challenges around data security regulations. WeChat Pay, as part of the WeChat social media platform, collects a wealth of data about its users: their location, preferences, social connections, and spending habits. This creates a mine of information that can be exploited for targeted marketing and consumer insights.

More worryingly, it is also being used to assign unofficial credit scores to PRC citizens, which come with benefits and penalties managed by private companies and government bureaus. Alibaba was recently forced to apologise for automatically opting in users to its credit scoring system. While these controls impact PRC consumers far more than the Australian businesses offering the mobile payment methods, they highlight concerns for all users around the lack of clarity about what exactly is tracked, how that information is managed, and how secure that information is.

These concerns are not unfounded. Australian businesses using these apps run the risk of the metadata collected providing more information than they are aware of sharing. It was only recently that the PRC central bank established a clearing house for these payment services in order to address concerns about money laundering and fraud. There are also potential risks associated with the influence Alipay and WeChat Pay may be able to exert over Australian retailers due to their dominance. Since they set the cost retailers are charged for offering a service, or for each transaction, this could be used to exert economic influence over the sector, or as a bargaining tool for the PRC with the Australian Government when negotiating other cross-border trade agreements.

To realise the benefits of this technological innovation, and temper the potential pitfalls, the Australian Government should draw on the expertise of those in the Fintech sector to understand the challenges of regulating this industry. Last year, the Australian Securities and Investments Commission (ASIC) and the China Securities Regulatory Commission (CSRC) entered an agreementto promote innovation in financial services in their respective markets. This is a great start to share ideas, but the Government should create an advisory committee to focus on identifying key concerns and putting forward measures or policy decisions to address them.

A similar initiative launched in the UK, with the China Market Advisory Group (MAG), which brings together senior practitioners from across the UK from the financial and related professional services industry to provide strategic insight, guidance and support to policymakers. It hosts an annual UK-China Financial Services Summit to allow industry to put forward its views on policy issues to the two governments. This kind of focus and direct link to Government policymaking is needed to allow innovation, while ensuring these new technologies are not in conflict with Australian data regulation and privacy standards.

Offering these new payment methods to Chinese visitors increases Australia’s attractiveness as a tourist destination, bringing benefits from the increased spending of the growing middle class. However, the Australian Government should not lose sight of the broader challenges in pursuit of short-term financial gain. Drawing on the knowledge of experts to ensure appropriate regulation and safeguards are in place will enable the retail sector to unlock the benefits, without the risk of paying a much higher cost.

Hannah works in Management Consulting and is a keen China observer.