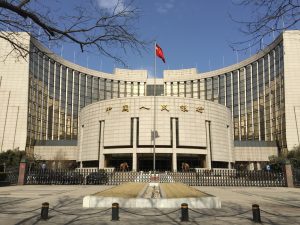 Is there a problem with…
the PRC’s debt?

The People’s Republic of China (PRC) has a debt problem. The Bank for International Settlements (BIS) states that the indicators it uses to measure the risk of a financial crisis are ‘flashing red’ for the PRC.1 The International Monetary Fund (IMF) has found that almost all other economies, which in a comparably short period of time have accumulated as much debt as the PRC, have experienced some form of economic crisis.2 The PRC’s debt as a share of GDP rose from about 140 per cent in 2008 to more than 250 per cent at the end of 2017.

The potential fallout of the PRC’s debt burden is pertinent to Australia given how closely our economy is tied to the PRC. Demand from the PRC has been a boon to Australia’s mining, education and tourism industries as well as Australian exporters of consumer products such as seafood, wine and dietary supplements. Exactly how the PRC’s debt problems will influence its – and by extension our – economy, however, is difficult to predict. Philip Lowe, Governor of the Reserve Bank of Australia, warned in May 2018 that the build-up in PRC debt over the last decade is one of the largest economic risks that Australia faces.3

A financial crisis in the PRC would unquestionably impact Australia severely. But while the warnings of the BIS and IMF seem fairly dire, PRC authorities are better positioned than their counterparts in most emerging market economies to avoid a crisis, most notably due to their proven ability to prevent capital flight, and the degree of control they can exert over major financial institutions. Rather, the challenge of the PRC’s debt problems is that it impacts the PRC’s economic growth prospects. The PRC’s debt levels will undoubtedly contribute toward slower growth. What is less certain is the magnitude of the decline, its pace and timing, and the ability of the authorities to manage the process.

From Australia’s viewpoint there is no way of predicting with any certainty what comes next, and what Australian businesses should prepare for: a financial crisis in the PRC, a recession, a fall in growth to 2 per cent, or a more moderate decline to 5 per cent. The PRC economy is in a state of flux.

For over a decade, the PRC’s growth has been driven by debt-fuelled investment in infrastructure, housing, and heavy industry. New debt in those areas does not generate as much growth as in the past. In an economy suffering widespread industrial overcapacity, factories struggle to generate revenues sufficient to repay the debt used to build them. Were debt to continue expanding rapidly, whether to fund industrial expansion or infrastructure construction undertaken by the PRC’s already overstretched local governments, the number of bad loans held by banks and shadow banks would rise. If they rose high enough, they would pose a threat to the stability of the financial system.

However, the PRC economy is no longer on that trajectory. Starting early 2017, PRC officials launched what they call a ‘deleveraging’ campaign. That is something of a misnomer. While the pace of debt accumulation has slowed sharply, debt levels have not declined in absolute terms. Nor has debt declined relative to the size of GDP. That is because, in the medium term at least, the PRC cannot afford to deleverage. The growth model is not only dependent on debt, but on debt accumulating at a faster pace than economic growth, something that has continued despite ‘deleveraging.’

The PRC’s debt problem is not just the level of debt but also the way in which it has been accumulated. Many of the risks are concentrated in the shadow banking system, which is more lightly regulated than the formal banking system. According to Moody’s Investors Service, shadow banking assets stood at 62.9 trillion yuan at the end of June, about 48 per cent the size of outstanding bank loans, down from 55 per cent at the end of 2017.4 The concern highlighted by the IMF was that an increasingly complex financial system could spawn a crisis that is beyond the ability of the People’s Bank of China (PBOC) to adequately control.5 It is in this area that the financial regulators in the PRC have made the most progress.

‘Deleveraging’ is best understood as ‘de-risking.’ It is a government-led campaign to have banks write- off bad loans more aggressively; to fine banks and bankers for violating regulations; to rein in shadow banking and have banks take explicit responsibility for obligations they have hidden off-balance-sheet; and to stop credit going into purely speculative ventures.

However, slower growing debt also means a slower growing economy, which presents other problems. If growth slows further, companies will find it harder to repay their existing debts, and bank profits will weaken, making it more difficult for them to write down bad loans. Even though the PRC’s financial regulators have diminished the risk of a crisis by reducing the number of bad bank loans and increasing oversight of shadow banking activities, the economic outlook is far from certain.

Complicating matters is that Xi Jinping’s commitment to financial reform is yet to be tested. The State Council has signalled that no significant stimulus will be forthcoming, but it is not inconceivable that should growth fall to levels deemed politically untenable – for example for fear of causing social instability – Xi could back away from his commitment to ‘deleverage’ and instead encourage the banks and shadow banks to reinvigorate their lending. The resulting surge in infrastructure and housing construction would stimulate growth, whilst exacerbating the debt problem.

PRC authorities know that they can no longer rely on the current debt-fuelled model of growth and so have promoted supply-side structural reform as an alternative. Supply-side structural reform is often used as short-hand for closing down factories in industries that suffer overcapacity, but it is also an explicitly pro-growth strategy aimed at supporting industrial upgrading and an expansion into more technologically advanced industries. The hope is that by building world class semiconductor and robotics sectors, as well as moving up the value chain in more traditional industries like textiles and chemicals, the PRC will create new nodes of growth to replace construction.

This has given rise to another source of uncertainty. The United States’ tariffs on PRC imports are intended to stop Beijing from using industrial policy to build dominant positions in advanced technologies at the expense of American firms. While the US is particularly belligerent in its opposition, the PRC’s efforts to upgrade its technological base – especially the ‘Made in China 2025’ program – cause unease in most developed economies.

Rising US interest rates further complicate the international environment. If the US Federal Reserve continues to raise interest rates as expected, that will likely create downward pressure on the value of the yuan as money tries to move out of the PRC. Large- scale capital outflows could precipitate a decline in housing prices, or result in liquidity shortfalls for financial institutions, thereby causing instability in the financial system. The PBOC could mitigate such pressure by raising interest rates, but that would make it more difficult for heavily indebted industrial firms to repay their loans.

Alternatively, the PBOC could allow the yuan to depreciate, but that may be politically untenable given international tensions. The State Administration of Foreign Exchange, the PRC’s foreign exchange regulator, is adept at restricting capital flows, which will likely allow Beijing to avoid liquidity difficulties. But it will not entirely mitigate pressure on the yuan.

In sum, the PRC does not face an imminent crisis but the economy’s elevated levels of debt complicate the options available to PRC policymakers, thereby making its economic outlook far less certain.

For Australia, the repercussions of the PRC’s debt problems are even harder to anticipate and will be shaped as much by Beijing’s response as by any slowdown in growth. For example, if Beijing opts for stimulus-led growth over financial reform, Australia’s mining sector will benefit from the boost to construction. Meanwhile, Australian businesses that have benefitted from rising consumer demand could suffer if declining housing affordability decreases household consumption. That could be exacerbated if the PBOC’s liquidity injections, which are necessary to ensure financial stability, further inflate property prices.

If the yuan depreciates against the US dollar, Australia could become a more appealing destination for PRC international students and tourists relative to the US. On the other hand, slower growth and concerns about the PRC’s economic outlook could make families in the PRC less willing to send their children overseas to study. A crackdown on capital flight could make it more difficult to transfer university fees out of the country. While Australia’s flexible currency regime will work to insulate the Australian economy against a broad-based slowdown in PRC growth, some businesses will nonetheless be harder hit than others.

The PRC is moving from being an unambiguous contributor to Australian growth to being a source of uncertainty. This is the fundamental problem with PRC debt, and it is important that the Australian government and business community take steps to mitigate the risks.

Dinny McMahon, author of China’s Great Wall of Debt: Shadow Banks, Ghost Cities, Massive Loans, and the End of the Chinese Miracle (Houghton Mifflin Harcourt, 2018), spent ten years as a financial journalist in the People’s Republic of China, including six years in Beijing at the Wall Street Journal, and four years with Dow Jones Newswires in Shanghai. He currently works at MacroPolo, an initiative of the Paulson Institute at the University of Chicago, where he writes about PRC financial reform.

In this latest policy brief, Dinny McMahon’s argues that the concerns about PRC debt are valid. Whilst an economic crisis is not imminent, he argues that high levels of debt have sharply narrowed the policy options available to policy makers in Beijing, complicating its economic future. The policy brief concludes with several recommendations, broadly aimed to strengthen Australia’s economic resilience, as well as encourage diversification and risk-mitigation strategies. 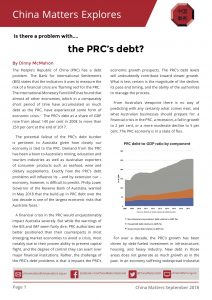