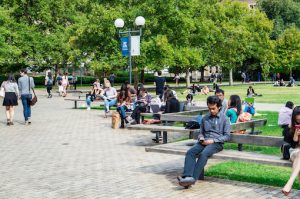 Is there a problem with…
Chinese International Students?

By Bates Gill and Linda Jakobson

Within the last year international students from the People’s Republic of China (PRC) have become a focal point of the Australian media. News reports and commentary center on a variety of grievances:

Any one of the above complaints pertains to only some of the 170,000 PRC students in Australian universities. However, even a minority could taint the image of the entire PRC student cohort and give rise to serious tensions.

This policy brief first explains the challenges related to PRC international students and then specifies policy recommendations to deal with these concerns.

What are the risks?
Students from the PRC are by far the largest foreign cohort in Australian educational institutions, with nearly 196,300 enrolments in 2016, or about 27.5 percent of all international enrolments. Enrolments by PRC students are heavily concentrated in the higher education sector: in the ACT, for example, more than 6 out of 10 foreign enrolments in universities were from the PRC in 2016.1

This data demonstrates that Chinese international students are enormously important for Australia. But the growing number of students from the PRC also poses real risks.

To begin, some universities have become highly dependent financially on the fees coming from PRC students. Some of the most popular university courses for PRC students—such as business and accounting—are often seen as ‘cash cows’, though few educators would publicly say so. As education costs rise and government financial support for education dwindles, the pressures to expand Chinese and other international student numbers are substantial.

University leaders are well aware of such financial risk. They acknowledge that diversification of the international student body—for example increasing enrolments from India, Indonesia, and Vietnam— would be preferable, but it is difficult in practice given the enormous number of qualified and financially capable students from the PRC in comparison to those other nationalities.

A decline in students from the PRC could arise for numerous reasons: the initiation of a major WeChat campaign to vent negative perceptions of the Australian education system; a belief that PRC students are not welcome in Australia or are at risk of harassment; an erosion of migration and employment opportunities for PRC students; or a downturn in Australia-China relations which restricts the flow of Chinese students.

A second pressing near-term risk is the lowering of academic standards. This problem primarily arises because PRC students are often not proficient enough in English to keep up with coursework, participate in group projects, and contribute to in-class discussions. This is a particular problem in some of the most popular courses for PRC students—such as in business schools—where the proportion of PRC students tends to be extremely high. This means that classes could be ‘dumbed down’ to accommodate large numbers of PRC students or, more troublingly, that PRC students undeservedly receive passing marks for sub-standard work. These students have become too important financially to be allowed to fail.

There is ample evidence of this problem. The ABC ‘Four Corners’ program revealed in 2015 that pressures to enrol and pass international students had fostered widespread ‘soft-marking, mass-cheating, and the bribery of academics’ in Australia’s higher education sector.3 In its investigation of New South Wales (NSW) universities, the NSW Independent Commission Against Corruption found ‘[t]here is pressure for some international students to pass courses that are beyond their academic capabilities [and] pressure on staff within universities in NSW to find ways to pass students in order to preserve budgets ….’ This results in ‘a widespread public perception that academic standards are lowered to accommodate a cohort of students who struggle to pass’.4

It is difficult to measure the extent of this problem—few administrators and faculty members openly acknowledge it. Universities compete fiercely for all international students. Certainly the perception of the problem exists among students, which in itself poses a risk. Local students (and other, non-PRC international students) complain that their education is hampered by the presence of PRC classmates. PRC students in turn may feel they are receiving a substandard educational experience. These perceptions give rise to tensions between PRC students and other students, which in turn tarnishes the attractiveness of Australian universities for PRC students.

A third risk involves unsatisfactory experiences of PRC students in Australian universities. As a group, students from the PRC tend to integrate less in Australian society, and many if not most have little meaningful contact with Australians. Government surveys reveal that PRC students’ satisfaction with opportunities to interact with Australians is almost 10 percent lower than for other international students.5 Students from the PRC often find the relationship with their universities as overly ‘transactional’, are concerned with latent xenophobia, and would like to see more support to help them integrate with and learn from Australian society. An often-heard (and quite telling) complaint is that their oral English skills deteriorate while they are in Australia.

More should be done to ensure their time here is as positive as possible and that they return home with a lifelong affinity for the country. They are ‘ambassadors’ who will not only shape the overseas choices of future students from the PRC, but who also represent a vast pool of goodwill and alumni support for decades to come. For most PRC students, the last substantive contact with their university is graduation day.

Lastly, PRC government efforts to influence academic discourse have increased partly as a result of the larger presence of PRC students in Australian universities. Academic research, investigative journalism, and first-hand accounts all affirm that PRC students are actively discouraged by their government from speaking critically about the PRC and especially about the Communist Party of China (CPC).

Moreover, students from the PRC are pressured—by officials at the PRC consulates and embassy and through organisations such as the Chinese Students and Scholars Association—to stifle classroom discussions on issues deemed ‘sensitive’ by PRC authorities, such as human rights, freedom of religion, internet freedom, sovereignty claims in the South China Sea, and Taiwan / Tibet / Xinjiang independence. They are encouraged to actively promote more ‘patriotic’ and ‘pro-PRC’ views on these and other China-related topics. Some are encouraged to engage in intelligence- gathering and report on the words and deeds of fellow PRC students as well as their teachers.

These activities contravene Australian societal values and academic principles. They also undermine Australian interests to ensure institutions of learning are places for rigourous, uncensored, and respectful debate, where students and teachers are comfortable advocating their views and are open to contending positions.

The problems outlined in this brief are immensely difficult to grapple with. Two factors are important when searching for solutions:

The vast majority of PRC students are politically passive, are not ‘stooges’ of the CPC, and have sufficient language skills to meet the normal requirements of a university degree. Generalisations and finger-pointing merely inflame relations on campus. On the other hand, not all zealous pro-PRC action on Australian campuses is directed by the PRC government. Some of the actions are initiated by individual students who ardently believe they should counter what they see as ill-informed views about the PRC. Others are more pragmatic —keen to demonstrate patriotism to boost career prospects upon their return home.

Dr Bates Gill, China Matters Board Director, is a professor affiliated with both the Department of Security Studies at Macquarie University and the Strategic and Defence Studies Centre at the Australian National University.

Ms Linda Jakobson is the CEO and Founding Director of China Matters.

In this first policy brief, Dr Bates Gill and Ms Linda Jakobson address the question, ‘Is there a problem with Chinese international students?’, and suggest several measures that could be taken to mitigate risks related to the country’s largest international student cohort. 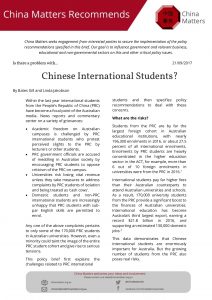