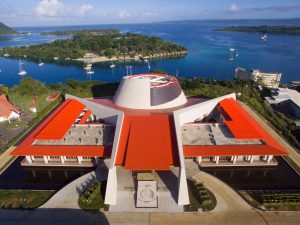 Is there a problem with…
PRC aid to the Pacific?

There is a problem with the People’s Republic of China’s (PRC) aid in the Pacific. It is fragmented, poorly monitored, project-based and contractor-driven, responsive largely to the needs of political elites in the Pacific. The PRC’s newly established State International Development Cooperation Agency is tasked with addressing ‘serious problems’ in its foreign aid program, and conducting more rigorous planning and monitoring. We should not miss the opportunity that this new agency provides for improving PRC aid in the Pacific.

Over the last few months, aid granted by the PRC in the South Pacific has become a focus of political and media debate in Australia. Points raised include:

The PRC’s aid program in the Pacific is significant. The Lowy Institute estimates that China is the third largest donor in the Pacific, with 218 projects. While this makes up just over four per cent of PRC development assistance, in some countries—notably Fiji—these projects are the main source of aid, though primarily in the form of concessional loans rather than grants.3 Pacific leaders welcome PRC aid, as it meets pressing political and development needs. For example, Papua New Guinea, the largest nation in the Pacific, met none of the United Nations 2015 Millennium Development Goals, and faces huge challenges in health, education and infrastructure.

Pacific governments have also rebutted criticisms of PRC aid. The Government of Vanuatu listed a series of buildings, from Parliament House to the Melanesian Spearhead Group’s Headquarters, noting ‘these are not white elephants. These are buildings of national significance to this country.’4 For two large projects funded by China Exim Bank loans, the Luganville Wharf and roads on Tanna and Malekule, ‘No donor was willing [to] help provide assistance on these projects although the economic benefits [are] huge.’

This is a key feature of PRC aid: while Australian and PRC contractors do compete for business in the Pacific, their aid programs have limited overlap and are complementary. The Belt and Road Initiative (BRI) reinforces the focus of PRC aid on infrastructure and enhancing regional transport and communication links. Many Pacific leaders praise PRC aid for not tying up their bureaucrats in meetings and paperwork, and for the speed of its delivery. There are, however, risks associated with PRC aid in the Pacific.

For several Pacific states—particularly Vanuatu, Samoa and Tonga—the PRC’s concessional loan program contributes to their high levels of external debt. In Vanuatu, Exim Bank loans are nearly half of their external debt that will rise to one-third of GDP by 2022. In Tonga, it currently stands at 43 per cent of GDP and repayment of the Exim Bank loans, due to start this year, will more than double the country’s debt service payments to 3.8 per cent of GDP.5

This debt is exacerbated by two factors. While most loans support productive infrastructure, some have been spent on grandiose projects that offer little return on investment or benefit to ordinary Pacific Islanders, such as oversized convention centres. The loans are also less concessional than the Pacific’s other main sources of debt. While well below market rates, the interest rate is higher and the maturity shorter than World Bank or Asian Development Bank loans. Given the depreciation of the USD against the yuan since the first round of loans in 2006, denomination of loans in yuan has caught out reserve banks in several countries.

A second risk is that collusion between PRC infra- structure contractors and Pacific politicians and bureaucrats has led to substandard aid projects and undermined efforts to improve local institutions.6 The limited capacity of the PRC’s fragmented aid bureaucracy and the lack of suitably trained PRC government representatives in-country to monitor aid projects has led to a contractor-driven aid program in the Pacific. For Exim Bank loans, the recipient country must choose an approved PRC contractor, giving companies leverage over the design and scale of aid projects. Exim Bank has only two staff for the entire Pacific, and the now-superseded Department of Foreign Aid in the PRC Ministry of Commerce (MOFCOM) had less than 100 staff for the entire world. In-country, the aid program is supervised by MOFCOM’s Economic Counsellor Offices, but for most Pacific nations, this will only be one or two staff in the embassy, who are also tasked with promoting trade and investment; aid runs a distant third to these priorities.

The announcement on 13 March that the PRC will establish a new agency for international development cooperation could address some of these concerns. It is likely to be shaped by Japanese and US techniques of using aid as a tool for ‘great power diplomacy’ but also by the sector-based approach of the UK’s DFID and AusAID. It also sends a strong political message that all embassies and economic counsellor offices must prioritise aid, to ‘better serve the country’s global strategy and to build the BRI.’

Much will depend on the budget and staffing of the new aid agency, and whether in-country agencies are allocated staff to monitor and evaluate projects. It will take more than a new agency to build expertise in development cooperation, but it is a welcome start. At present, the effectiveness of PRC aid is a function of two factors:

A third risk is that negative perceptions of PRC aid feed existing tensions with Pacific Chinese communities that have led, for example, to racially-tinged riots and evacuations in Solomon Islands, Tonga and Papua New Guinea. Large populations of PRC migrants, who have been moving to the Pacific in search of business opportunities since the 1990s, dominate the retail sectors in most Pacific nations. Although they have no link to Beijing’s aid program and have a largely antagonistic relationship with the PRC state, they are the face of the PRC in the Pacific. Perceptions of favourable treatment for new PRC migrants—the waiving of English language requirements and laws proscribing them from work in the retail sector—feed local concerns of political corruption.

Common local criticisms of PRC aid—insufficient use of local workforces and materials, corruption of Pacific officials, shoddy workmanship—layer onto preconceptions of ‘Chinese’ behaviour, making Chinese communities easy targets during periods of social unrest. With overseas citizen protection becoming a priority for the PRC state, there is concern that future military-led evacuations of these vulnerable populations may lead to ‘accidental friction’ between PRC and Australian forces.7

Finally, there is a risk that PRC aid will be more politicised, serving as a diplomatic and geo-economic tool because of the Pacific’s inclusion in the BRI and the pro-independence Democratic Progressive Party’s hold on power in Taiwan. Six of Taiwan’s 20 formal diplomatic allies are in the Pacific and aid will play a role in furthering the PRC’s strategic ambitions. In the words of the PRC’s ambassador to Vanuatu, where there are debts, there will be ‘no free lunch.’

Signs of the PRC’s willingness to leverage aid for political advantage in the Pacific are already visible. Fiji closed its trade and tourism office in Taiwan immediately after Prime Minister Bainimarama attended the Belt and Road Forum in May 2017. This was followed by over a hundred PRC law enforcement officials being allowed to round up an alleged ring of internet scammers on Fijian soil. In an operation largely designed for PRC domestic propaganda purposes, PRC citizens were hooded and marched onto a waiting aircraft, with no legal process. Vanuatu became the first Pacific nation to support the PRC in the South China Sea dispute and admitted this was in response to a request from the PRC embassy.8

The issues outlined above are intertwined with geopolitical currents involving other major powers in the region, and complex and evolving local issues around landownership and national identity. A couple of factors should be considered in searching for ways for the Australian government to engage with PRC aid in the Pacific:

Concerns about Australia’s loss of influence in the Pacific are misguided when they focus solely on aid. Australia is the largest donor in the Pacific by a wide margin, with historical ties that the PRC does not have. The Pacific is a low priority for the PRC government, making cooperation and coordination with PRC actors easier than in other regions. We cannot control the PRC’s international actions, but should remember that influence is not a zero-sum game. What we can control is our own attractiveness to Pacific nations. Pacific concerns such as labour mobility and climate change need to be taken more seriously.

Dr Graeme Smith is a fellow with the Department of Pacific Affairs at the Australian National University. He is known for his research on PRC aid, investment and migration in the South Pacific, and into the changing dynamics of the local state in rural China. He is also the co- host of the Little Red Podcast with Louisa Lim.

China Matters welcomes your ideas and involvement. Please contact us at [email protected]

In this policy brief, Dr Graeme Smith addresses the question, ‘Is there a problem with PRC Aid to the Pacific?’, and suggests several measures that could be taken to mitigate the risks associated with foreign aid in the Pacific. 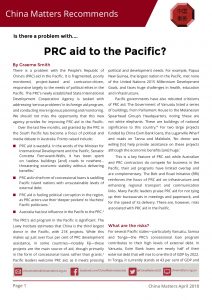