The following is a translated post on the WeChat (微信) social media account of the Global Times (环球时报). The post recounts economist Jeffrey Sachs’ defence of Huawei, the telecommunications conglomerate, and the online backlash which ensued.

Really impressive, you guys have won

Jeffrey Sachs, a well-known economist from Columbia University, was unexpectedly attacked online because Western media published a few of his impartial remarks and criticism of the US government’s persecution of Huawei.

Moreover, one of the people who attacked him claimed with satisfaction that Sachs had been forced to delete his social media account.

Of course, speaking about Mr. Sachs, many Chinese people may not know very much about him. But Gengzhi Ge believes the controversial theory of “shock therapy” is spoken about in economic circles and many people will have heard about it.

Sachs is the originator of shock therapy. He and his theory have created economic miracles in Chile and Bolivia in South America and in Poland, Estonia, the Czech Republic, Slovenia and other countries in Eastern Europe in the last century. They have curbed the vicious economic inflation in these countries. Even though Russia somersaulted due to all kinds of internal and external factors since the disintegration of the Soviet Union, this has not affected his becoming one of the most well-known economists in the world.

Later, Sachs worked to help developing countries deal with the eradication of poverty, debt relief, disease control, and sustainable development, and published a book entitled “The End of Poverty: The Economic Possibilities of Our Time.” During this period, China, which was also a developing country, and its poverty alleviation model naturally attracted his attention and gradual approval.

Not long ago, he also participated in the filming of a documentary interview entitled “How Poverty Has Disappeared in China.”

Of course, the stronger the country, the more responsibilities it has. In Sachs’ view, China, as a populous country and an economic power, will also play a more important role in promoting the sustainable development of the global economy, in which technological innovation is even more essential. Therefore, Huawei, a well-known Chinese technology company, has become a main target for Sachs.

Of course, everyone knows what happened afterwards: At the beginning of December, Huawei’s senior executive Meng Wanzhou was suddenly arrested by Canadian authorities at the request of the US on the grounds that Huawei had violated the US sanctions against Iran. This caused a global uproar.

Sachs simply wrote an article entitled “The War on Huawei”, denouncing the US government for its behaviour in directly arresting people and as having nothing to do with maintaining the law. Its real purpose is to protect backward enterprises in the US and to play geopolitics. This is the greatest threat to international rule of law and even global peace.

Not only that, but Sachs also revealed that some Western media have stifled Huawei. He said that  the media still discredits and blacklists Huawei even though they can’t find any evidence for the accusation that it is infiltrating the Western world.

His article naturally incited the hatred of various anti-China forces in the US. For example, Issac Stone Fish (in the picture below), an anti-China scholar who writes for the Washington Post and other media, launched a personal attack on Sachs. 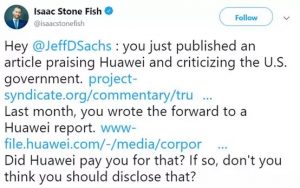 Ironically, in Stone Fish’s slanderous post a lot of forces suspiciously taking US Congressional anti-China funds follow suit, insulting Sachs as a traitor and a sellout.

But Sachs was not so despicable. He responded rationally to this personal attack, saying that he didn’t write this article for money, but to show his genuine respect and approval of Huawei.

He further elaborated his point of view at the same time: he doesn’t hate the US, but only believes that the two great powers should negotiate to solve problems instead of engaging in a new Cold War.

But an unworried Stone Fish came up with a way to force him with a group of enforcers. Like a clown, he threatened that Sachs must follow them in criticising the Chinese government. In particular, when criticising its persecution of human rights in Xinjiang. Otherwise, he will keep harassing Sachs and continue suspecting that he has taken Chinese money.

However, Sachs responded that he wanted to understand the actual situation in Xinjiang, but he did not want to be “misled by the US government’s propaganda and double standards”:

This response naturally angered Stone Fish. He immediately posted to call together a group of anti-China media people and even supporters of the East Turkestan terrorist organisation to harass Sachs.  They sent large amounts of false Western media information on Xinjiang in line with the US government’s position to Sachs:

As a result, after this harassment went on for many days, the anti-China forces suddenly discovered that Sachs’ social media account had disappeared. But these anti-China elements, who usually make a big noise about respecting freedom of speech, not only harassed a well-known economist into silence and even caused his account to disappear, they even immediately and buoyantly declared victory.

For example, Stone Fish claimed that he had questioned Sachs’ receipt of Huawei’s money and that Sachs had deleted his account out of shame. 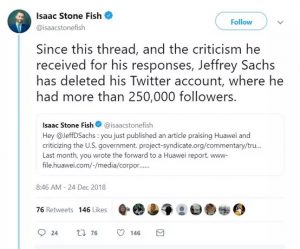 James Palmer, editor of Foreign Policy, overtly praised this persecution, saying, “I am very happy that we have finally gotten rid of Sachs and forced him to delete his social media account.”

He explained why he was excited to those who didn’t know about the situation, saying, “Who asked him to write a fatuous article about Huawei, which also said that Western media reports on Xinjiang are US government propaganda? So he was criticised so much that he deleted the post and got what he deserved.”

This is the “freedom” given by the Western mainstream media and scholars who always say that others are harming freedom.