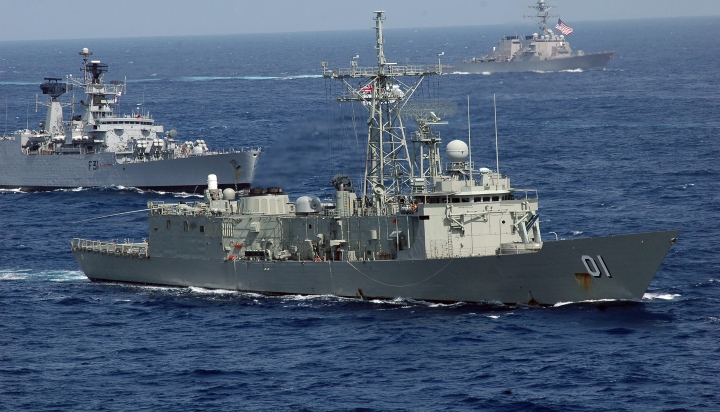 The Quad Redux: Casting Off The Albatross
David Lang

Ships from the American, Indian and Japanese navies will gather in the Bay of Bengal for Malabar 2017 later this month. The wargames come six months after Canberra formally asked the Indian defence ministry to consider permitting observer status to a handful of Royal Australian Navy vessels, and mere weeks after that request was denied. The consolation reportedly offered by Delhi was that Australian officers could watch the maneuvers from the decks of the participating countries’ ships. That wasn’t the outcome Australia was after, but it’s still a small step in the right direction. While the expanded Malabar exercise was a one-time matter of contention in the Sino-Australian relationship, Canberra should continue to push for its resurrection.

The history is well documented. Buoyed by cooperation in response to the 2004 Indian Ocean tsunami, and with China’s growing economic and strategic heft giving pause, policymakers in Delhi, Tokyo, Canberra and Washington spied an opportunity. May 2007 saw the Quadrilateral Security Dialogue convened on the sidelines of the ASEAN Regional Forum. That September, the four, along with Singapore, sent their navies off to momentarily supercharge the US-India naval engagement into a large multilateral endeavour. Diplomatic demarches from Beijing and a change of government in Canberra saw Australia unilaterally back away from the group in 2008.

In the final analysis, Beijing’s actions in recent years have cast a pall over prospects for continued peace and stability in the Asia-Pacific.

The regional strategic designs of President Hu’s China in 2007 were far less clear, and its actions far less provocative and assertive, than they are under President Xi today. China presents a major challenge to the established rules-based regional order, particularly at sea. Compulsive land reclamation efforts in the South China Sea are but one aspect of a coercive and muscular foreign policy that seeks to carve out a regional sphere of influence for China. In the final analysis, Beijing’s actions in recent years have cast a pall over prospects for continued peace and stability in the Asia–Pacific.

In the face of this more worrying regional strategic environment, it could be said—with hindsight—that the Quad was an idea before its time. While the Trilateral Strategic Dialogue between the US, Japan and Australia has existed since 2006, minilateralism between the Quad partners has proliferated since 2007: the US–Japan–India trilateral has been on the scene since late 2011, the Japan–India–Australia trilateral arrived in mid-2015, and Japan joined as a permanent participant of Malabar in late 2015. With those complementary engagements supported by positive bilateral relations among the four, it’s easy to imagine that expanding Malabar might actually be reasonably straightforward today if it wasn’t saddled with the baggage of a decade prior. That earlier outing hangs like an albatross around the neck of Australia’s ambitions to join today.

Reviving the Quad would be an important act of strategic signalling, from which a number of benefits could flow. At the operational level, the four navies get to build interoperability, inter-force relations and trust. They also get to consolidate habits of cooperation, shape a shared perception of the strategic environment and demonstrate collective resolve. At the regional level, it would stand as a contribution to a more ‘networked security architecture’ that further evolves the hub-and-spokes system and matures the region’s nascent multipolar flavour. The initiative would impose a cost on Beijing for its recent behaviour.

The Quad members could come together to pursue … a stable, open and prosperous region wherein China abides by the established rules and norms.

While China’s tolerance for multilateral security activities in Asia appears to have grown, Australia must nonetheless be prepared for Beijing to again brand an expanded Malabar as a tool of containment or encirclement. Member countries should resist such claims if they’re made. The Quad members would come together to pursue their shared interest in a stable, open and prosperous region wherein China abides by the established rules and norms. But let’s be clear: China is the Quad’s animating principle. Once the group is again off the ground, China should be invited along as an observer.

India didn’t deny Australia’s request in order to mollify China, nor because of some overwhelming angst about Australia’s about-face in 2007—though some in Delhi maintain lingering doubts about our reliability. The time just wasn’t right, meaning that expanding Malabar will require Australia’s ongoing patience. Canberra should continue to quietly push the idea forward and advance Delhi’s understanding of the RAN’s capabilities. Last month’s Indo-Australian naval exercise off Western Australia was just our second together (the first was in 2015), so these are early days.

The Quad 2.0 must be sustainable, well-calibrated and built on consensus, so there’s no alternative but to wait for Delhi to come to the party. Pending the character of China’s contributions to the region and Washington’s appetite for Asia-Pacific minilateralism, the group could yet shape up as a worthwhile venture to complicate Beijing’s considerations.

David Lang is an analyst and managing editor of The Strategist at the Australian Strategic Policy Institute.

The opinions expressed in this article are the author’s and do not represent the views of China Matters or ASPI.
(Photo: Wikimedia Commons)