What should Australia do to…

manage risk in its relationship with the PRC?

The biggest challenge facing Australia’s strategic policy is to help craft a new strategic equilibrium in the Indo-Pacific. It must reflect the reality of the People’s Republic of China’s (PRC) economic and strategic weight. But it must also be organised around the principle that coercive behaviour will be collectively opposed by a core group of states which, for differing reasons, do not wish to see the PRC become the predominant Indo-Pacific power.

Australia’s China policy cannot be written on a blank page. It must reflect not just our interests and ambitions but also the world as it is. International relations form a complex ecosystem. Not even superpowers can bend them to their will.

There is no quick fix for our challenges with the PRC. But clarity of objectives, holding firm when it matters, discipline in messaging and a clear-eyed sense of the national interest will help stabilise the relationship. “Engage and constrain” should be the two guide rails of our approach.

There should be four starting points of our China policy:

Stop debating whether the PRC will overtake the US

Too much of our public debate is focused on whether or not the PRC will overtake the US in strategic and economic weight. The narrative is distorted by assertions of the PRC’s inevitable rise and the terminal decline of the US. Neither is assured. The PRC may or may not overtake the US. The more important point is to be prepared for either contingency.

The US has been written off before. Its political dysfunction seems to be getting worse, but the US economy retains great depth and flexibility. It is a powerhouse of innovation and higher education. Although the PRC is catching up militarily, especially in East Asia, the US’s firepower and reach are unmatched.

The law of large numbers, on the other hand, suggests that the scale of the PRC will ultimately prevail. But we should be cautious about projecting past growth long into the future. And even if the PRC overtakes the US, it will predominate with few allies and in a different world with many more major powers than the US ever had to contend with.

Nevertheless, let us assume that the PRC’s leadership is smart enough to keep the bicycle upright and that the PRC continues to shift relative strategic weight in its favour. Moreover, we should assume that Beijing’s instinct to leverage economic power (real or imagined) for strategic gain continues to fuel a more assertive and coercive foreign policy.

The US is determined to retain its strategic predominance of the Indo-Pacific because remaining number one is now deep in its DNA. But what if this determination fails or takes the US down the wrong policy path? Is there a better way of ensuring that the PRC does not have a clear run?

To break through the dead-end debate on whether the PRC will overtake the US, why not start from a different and far less contentious position? Namely, there is no way that the PRC can be stronger than the aggregate weight of the US, Japan, India and Australia (the so-called “Quad”) plus any other country – such as Indonesia and South Korea – that judges that the PRC’s strategic predominance is not in its interest and is prepared to act accordingly. The last requirement will probably exclude most South East Asian countries, which do not want to be associated with a constraining strategy but are nevertheless uncomfortable about the PRC’s behaviour.

Constraining the PRC is not a call for a grand anti-PRC military alliance. Indeed, some of the members of this group are allergic to the very idea of alliances. Rather, it is a means of managing the PRC’s ambitions in a way that puts constraints on how far Beijing is prepared and allowed to go. It signals that leverage is a two-way street.

It is also a rejection of “hope for the best” engagement. It is saying to Beijing that we want a relationship of mutual benefit, but we also want the PRC to pursue its interests in a way that respects the sovereignty of others and avoids coercion. And if the PRC behaves otherwise, there will be collective pushback from countries that are capable of effectively doing so.

Beijing may well portray this as containment by another name, but we should not give it a veto over our strategic policy. Besides, constraining the PRC differs from containment – the ultimate logic of which is a rejection of engagement. Containment seeks to thwart and weaken the PRC. Constraining seeks to manage a powerful PRC.

Constraining the PRC will require a new strategic equilibrium in the Indo-Pacific. It will take time to construct. It will operate in the space between alliances and consultation. Collective pushback – when needed – could take many forms such as coordinated but separate freedom of navigation exercises, joint statements on breaches of international law or gross human rights violations, closer strategic partnerships, and more joint training exercises.

The Quad currently has neither the unity of approach nor the will for serious collective action. But the PRC’s behaviour is shifting perceptions as more countries watch with unease what an assertive PRC looks like. This will increase the appetite for collective action.

Unilaterally resisting PRC pressure is hard and unilaterally constraining the PRC is impossible, except possibly for the US. It is better to do it collectively and certainly a better option than the unilateral US containment of the PRC. I say unilateral because I cannot see Japan, India or Indonesia supporting containment and I hope Australia will have more sense than to embrace it.

Although containment may currently look like a straw man, it is gaining traction in the US and it even has its cheerleaders in Australia. We should not underestimate the policy momentum that it might develop.

It is not easy to contain a country as integrated into the global economy as the PRC, unless of course the strategy is to dismantle that global system and the supply chains that support it, which is precisely what some advocate.

For most countries, the costs of decoupling the PRC from the global economy would be obvious. For Australia, decoupling our largest trading partner would be sheer folly, irrespective of the legitimate complaints levelled at the PRC’s trade and economic behaviour.

Even before COVID-19, there were signs of deglobalisation. That trend may now accelerate. Some deglobalisation makes sense, including diversifying supply lines for critical goods. Technology may also make it easier to onshore what has up to now been offshored. There will even be times when we choose to make things at home which may be made more cheaply abroad because we put social or political objectives ahead of efficiency.

But at the heart of globalisation sits comparative advantage in trade and the efficient allocation of resources – and we abandon these concepts at our economic peril. Australia has been a beneficiary of globalisation and we have managed its politics and the equitable distribution of its benefits better than most. Donald Trump is US president largely because the US did not.

Our wealth as a nation and the living standards of our citizens are best served by an open economy, rising levels of productivity and a liberalising trade system. COVID-19 does not change that and neither does Beijing’s strategic ambitions nor its economic behaviour.

Are we too dependent on the PRC? The answer will not be found only in percentages. While the PRC takes more than one-third of Australia’s exports – more than the next five export destinations combined – in an earlier age the United Kingdom took an even larger share of our exports.

The difference now is the political character of the PRC. It is an authoritarian system prone to threatening trade consequences if we do or say something that Beijing does not like. Usually this is bluster designed to make enough nervous business leaders go running to the Government to warn that we need to be nicer to the PRC. But it would be unwise to assume that it will remain bluster. So, it makes sense for Australia to diversify its trade connections: not by deliberately slowing trade with the PRC, which would not be in our interests, but by growing trade with other countries such as the US, Japan, South Korea, India, Indonesia, Vietnam and a post-Brexit UK.

Trade diversification is a worthy national objective, but it is markets, not governments, that drive trade. Some products would struggle to find alternative markets, including iron ore which is by far our largest export to the PRC. It is also unrealistic to expect individual Australian businesses to turn their back on profitable trade opportunities with the PRC, but the Government can help businesses to expand to other markets through pushing for trade liberalisation, negotiating free-trade agreements and, most importantly, putting in
place domestic economic settings that make Australian firms more internationally competitive.

We cannot unilaterally set the terms of engagement with the PRC. But we can frame the relationship around an “engage and constrain” strategy with domestic, bilateral and geopolitical components anchored in the following principles:

Peter Varghese AO is Chancellor of The University of Queensland and a former Secretary of the Department of Foreign Affairs and Trade and Director-General of Australia’s peak intelligence agency, the Office of National Assessments.

In the latest edition, Peter Varghese argues that Australia needs to help craft a new “strategic equilibrium” in the Indo-Pacific which involves both constraining and engaging the People’s Republic of China (PRC).

Australia’s interests are best served by engaging the PRC bilaterally and multilaterally but also by supporting arrangements to constrain the destabilising aspects of its behaviour. Australia should work with countries such as the US, Japan and India, as well as Indonesia and South Korea, to build a strategic equilibrium in the Indo-Pacific with the capacity to collectively constrain the PRC when it behaves coercively.

As part of this, Australia should continue to push for an open global economy. Decoupling Australia’s economy from the PRC’s would be folly, Varghese writes, but Australia should lower its trade dependence on the PRC by embracing market diversification and implementing economic reforms that lift domestic productivity and international competitiveness. 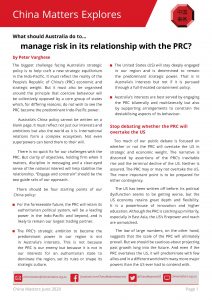