Photo by Pixabay from Pexels

its politics being too white?

Australian politics is too white. It is less diverse than comparable countries such as the United Kingdom, New Zealand and Canada. This is embarrassing. We cannot be “the most successful multicultural society in the world”, as former prime minister Malcolm Turnbull wrote, if our institutions do not reflect Australia’s cultural diversity.

The lack of diversity hurts our democracy. It leads to more disconnected, myopic and polarised debates about race and national identity. The homogenous nature of Australian politics is one reason why politicians find it difficult to deal with issues like foreign interference because there is insufficient cultural and political knowledge of the foreign entities the government seeks to legislate against. A truly representative parliament is necessary if we want Australia to successfully navigate big foreign and domestic policy challenges, and to reflect the values of equality which Australia stands for.

Chinese-Australians, in particular, have found it challenging to participate in politics over the last three years because of a growing public perception that the Communist Party of China (CPC) operates within and influences the actions of Chinese-Australian communities. This includes the use of political donations.

In order to create a more representative parliament, Australia needs to do three things:

1) Political parties should publicly report on their cultural diversity and adopt targets for winnable seats;
2) Political parties and Chinese-Australian communities must train and foster a group of skilled and experienced candidates;
3) The Commonwealth must rebuild trust in political institutions by establishing a national integrity commission and capping political donations.

These measures will enable the setting of goals for improving representation, maximise chances for culturally diverse candidates to be elected, and help address concerns about undue influence in politics.

How severe is political underrepresentation in Australia?

The full extent of underrepresentation is unknown because measurable data on the cultural diversity of Australian political parties does not exist. Without data, it is difficult to measure or even set goals to improve Asian-Australian (and Chinese-Australian) representation.

The major political parties do not collect and publish nationally consistent data on their cultural diversity. Parties require reports on other forms of representation such as gender. The ALP National Constitution, for example, requires an annual affirmative action report to the National Executive that reports on gender for party positions, union delegations and public office preselections.

Australia’s federal parliament is less representative than comparable English-speaking Westminster democracies. One in 10 MPs elected in the recent British election are from black and minority ethnic backgrounds.1 At the 2019 Canadian federal election, 15.1 per cent of MPs elected were visible minorities.2 In New Zealand, 6.7 per cent of MPs are of Pacific Peoples ethnicity and 6.0 per cent are Asian.3 In contrast, only nine of 227 or 4 per cent of Australian federal MPs have non-European heritage.4 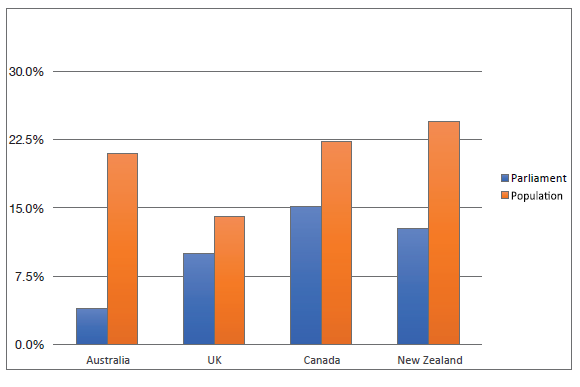 Underrepresentation extends to senior leadership levels. Not a single Australian federal minister is from an Asian-Australian background. In stark contrast, upon becoming Prime Minister, Boris Johnson said he would form a “cabinet for modern Britain”, including four British Asians in senior positions. In Canada, six of the 37 members of the Cabinet are Canadians of Asian heritage. Australia lags behind its peers in every aspect of political representation of culturally diverse minorities.

Why is representation so low?

While parties have courted Asian-Australian communities, they have done little to attract individual party members. Parties have established associated groups, for example, Liberal Party Chinese Council or Sub-Continental Friends of Labor, but these are primarily vehicles for fundraising with no role in party decision-making. These groups provide only a limited role for individual party members to step up.

Improving representation will require addressing negative perceptions about politics and navigating generational differences within communities. Attempts to encourage interest in party politics have failed; for example, the Chinese-Australian Forum, a non-partisan body, trialled “Opportunity Meetings” to promote participation – without success. Political engagement continues to be dominated by older generations with existing relationships and who tend to be more comfortable with transactional politics. A generation of younger Chinese-Australian leaders is missing, a gap the communities urgently must address.

The professionalisation of politics compounds the problem of a lack of diversity in Australian politics. Candidates tend to be insiders with existing party networks. Almost 40 per cent of federal MPs in 2018 worked as advisers in state or federal government before running for office, up from less than four per cent in 1988.7 Former Liberal Minister Craig Laundy has commented on the need for more culturally diverse representatives, noting many MPs had been through a “factory process” which involved working as a staffer.8 Moreover, culturally diverse candidates who do get preselected tend to be chosen for unwinnable seats.9

Chinese-Australians face particular challenges when trying to enter politics because of a growing perception that those with strong Chinese community connections could have links with individuals and organisations associated with the Communist Party of China. In NSW, currently only three state MPs and not a single federal MP has Chinese heritage despite constituting nearly 10 per cent of the population in Sydney.10 In Victoria, there is only one state and one federal MP of Chinese background. Chinese-Australians are an electoral liability. Research has found a candidate of Chinese background decreases the probability of voter selection by 6.4 per cent.11

The foreign interference debate has made improving the political representation of Chinese-Australians even harder. The investigation by the Independent Commission Against Corruption into political donations to NSW Labor and ongoing questions about Gladys Liu’s membership of groups linked to the CPC have also created negative perceptions about Chinese-Australians in politics. It is made worse by unverified claims, such as those by Clive Hamilton that preselected candidates of Chinese ethnicity are “likely to be trusted by Beijing”.12 As former Labor candidate Jason Yat-sen Li has stated, “this environment is tremendously disenfranchising for Chinese-Australians.”13

One Chinese-Australian politician in Sydney told a China Matters researcher that it is much harder to be a politician of Chinese heritage now compared to three years ago. The current political climate will accentuate underrepresentation unless action is taken.

The establishment of a national integrity commission and stipulation of a cap for political donations may help address some public concerns about undue influence in politics that has become associated with Chinese-Australians. The 2019 Australian Election Study found only 25 per cent of Australians believe people in government can be trusted, the lowest it has been since the survey began in 1979.

A national integrity commission would be a best-practice independent, broad-based public sector anti-corruption commission for the Commonwealth. The body would investigate at the federal level suspected corruption and misconduct of MPs, political staffers, ministers, public servants and members of the judiciary. It would also be responsible for promoting integrity and preventing corruption. State-based anti-corruption bodies would be obliged to abandon their investigations once it crossed state borders. Currently, there are no federal mechanisms to hold public hearings and publicly hold federal office bearers accountable.

Both a national integrity commission and a cap on political donations are mechanisms to address distrust in government because it will help counter the belief that political decisions are influenced by money. It would also affect the underrepresentation of Chinese-Australians in politics by addressing public fears about undue political influence, which is tied to concerns about donors with alleged links to the CPC. Rebuilding the public’s trust in our democratic processes will help combat negative perceptions, which the foreign interference debate has given rise to and made harder for Chinese-Australians to be involved in politics.

Osmond Chiu is a Research Fellow at the Per Capita think tank. He has worked in policy roles for over a decade and has written for Guardian Australia, Sydney Morning Herald and Canberra Times. He is the chair of the Inner West Council Multicultural Advisory Committee and also an elected rank-and-file member of the NSW Labor State Policy Forum.

Chinese-Australians face added hurdles because of perceptions, spurred and strengthened by the foreign interference debate, that Chinese Australians could have ties with the Communist Party of China.

In addition to adopting cultural diversity targets, Chiu calls for political parties to measure and publish data on their diversity and foster and train a group of culturally diverse candidates. He also advocates the establishment of a national integrity commission to investigate issues of undue political influence and passing laws to cap political donations. 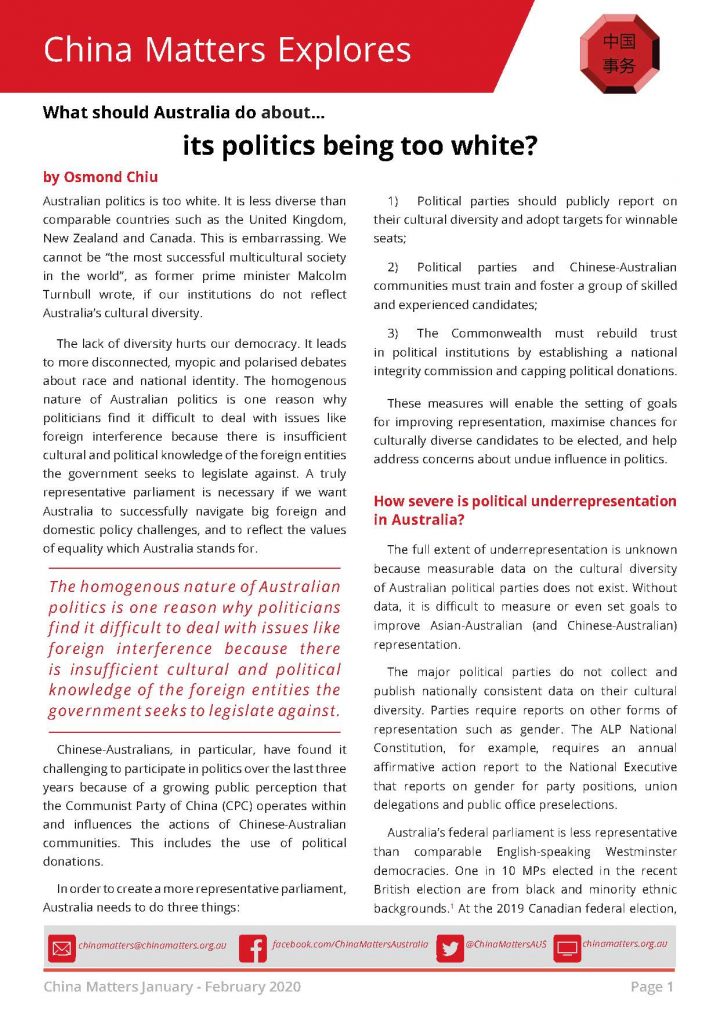